The OpEneR project started in May 2011 and will run until end of July 2014. Six partners are intensively cooperating from the beginning onwards to achieve the OpEneR targets (see Tab. 1).

Table 1 OpEneR partners and their expertises

The driving strategies yield a significantly increased driving range while providing both driver information and driver instruction. All in all the strategies are designed in such a way, that a safe driving is always guaranteed. 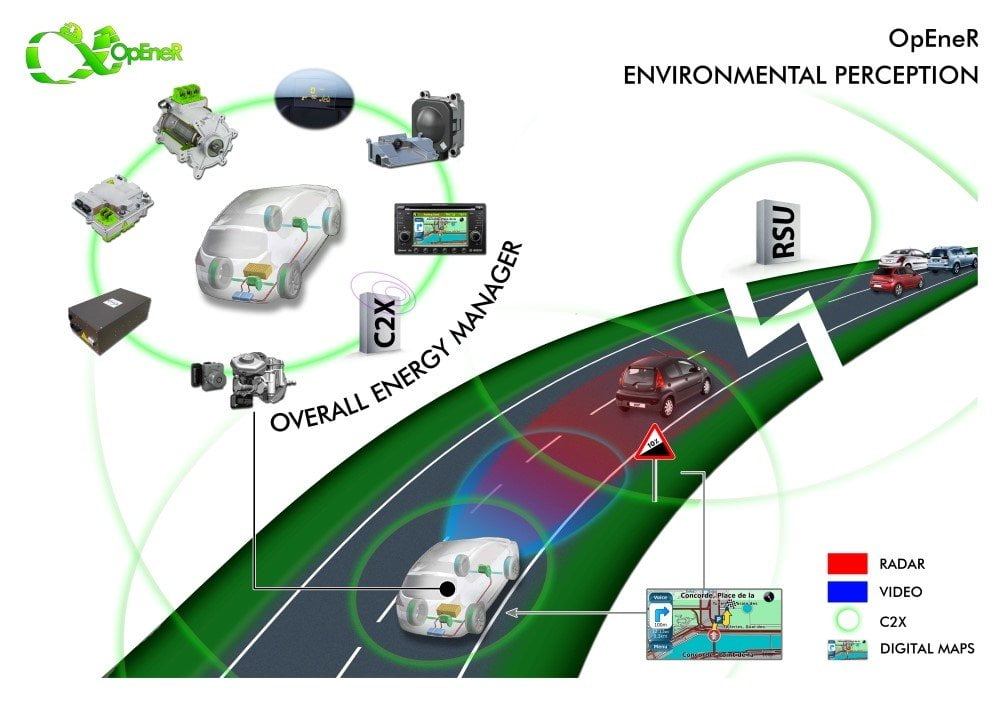 To allow real testing of new energy management functions, the consortium agreed on the build-up of two fully electric vehicle prototypes that were based on PSA’s Diesel Hybrid technology. The rear axle is still electrically driven and the Diesel combustion engine on the front axle was replaced by a second electric motor. Fig. 2 shows a CAD model containing the core components of the electric powertrain, i.e. four LiFePO battery packs with a capacity of about 40 kWh, two power electronic units for motor control in the rear, and two electric motors with 50 kW power each. 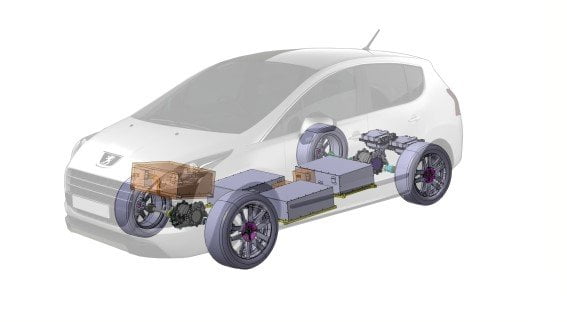 The first OpEneR prototype was build up until February 2012, the second was finalised a bit later. Both vehicles were intensively used for testing on closed test tracks first. For example on Bosch’s proving ground in Sweden, were PSA and Bosch jointly tested new functionalities. Fig. 3 shows a photograph of the prototypes as they were run in winter testing in March 2013. Since December 2013 the vehicles are released for testing on public road. As final event of the project a demonstration day covering most of the new energy management functions will be held as part of the third project review. All partners will therefore come together at CTAG’s premises in Vigo, Spain, where the so called intelligent corridor equipped with car-to-infrastructure technology is located. 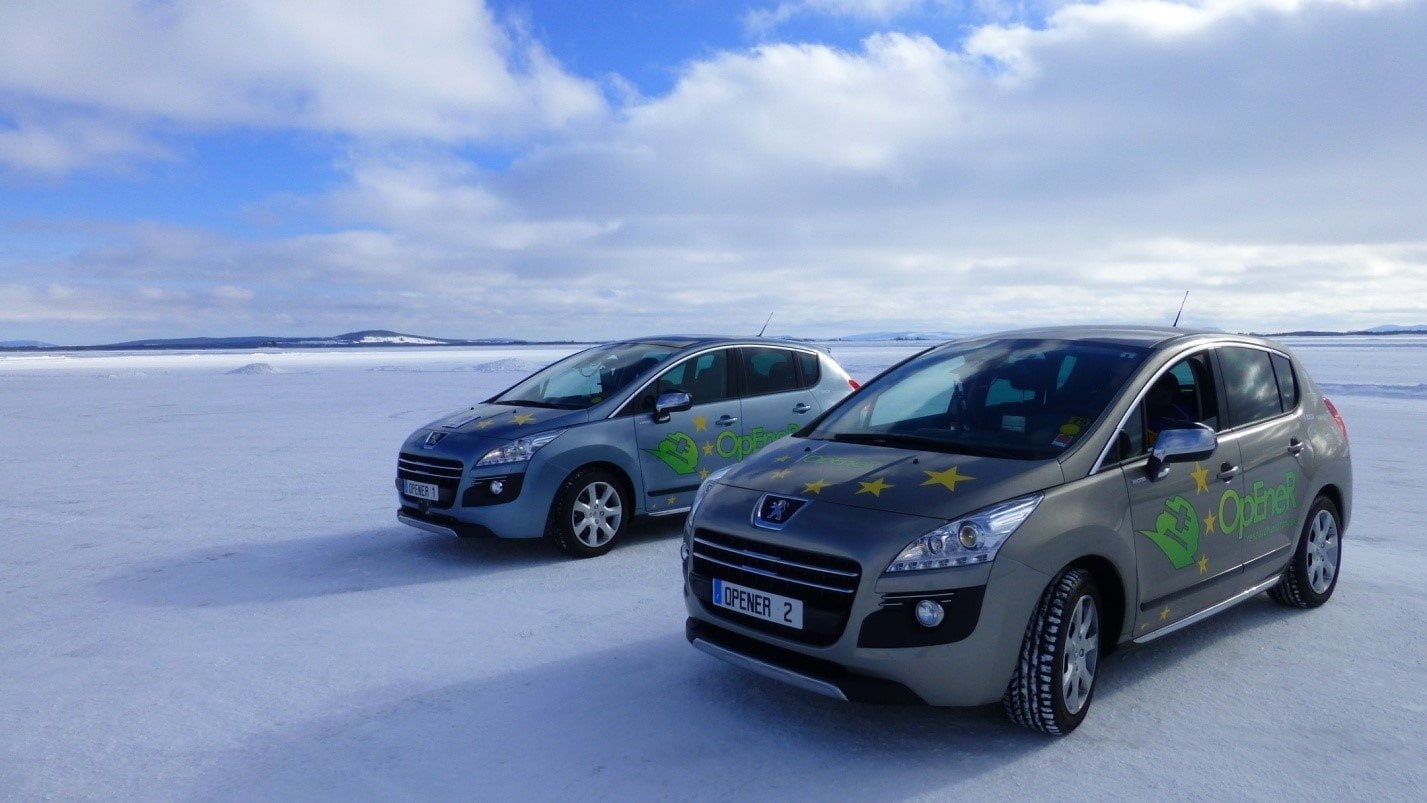 New functions aiming for an energy optimal operating of the OpEneR vehicles were developed. We here show the status as presented during the second project review in June 2013.

The effectiveness of the method has been verified within test drives on public roads. On twenty different routes average energy savings of 30.9 % using the energy efficient route compared to the fast route has been identified. The travel time is increased by 14.3 % only when applying the OpEneR energy efficient route. Fig. 6 shows results for one example route.

The availability of two electric machines each located on a different axle of the OpEneR vehicles allows splitting the demanded torque in order to gain efficiency. Since the efficiency characteristics of both machines are known, an optimization problem is solved to acquire a distribution factor that is optimal in terms of energy efficiency. As shown in Fig. 7, for typical driving scenarios (ARTEMIS cycles) a reduction of machine and inverter losses of up to 23 % is possible compared to a naive 50:50 distribution, leading to a range increase of 4 %. 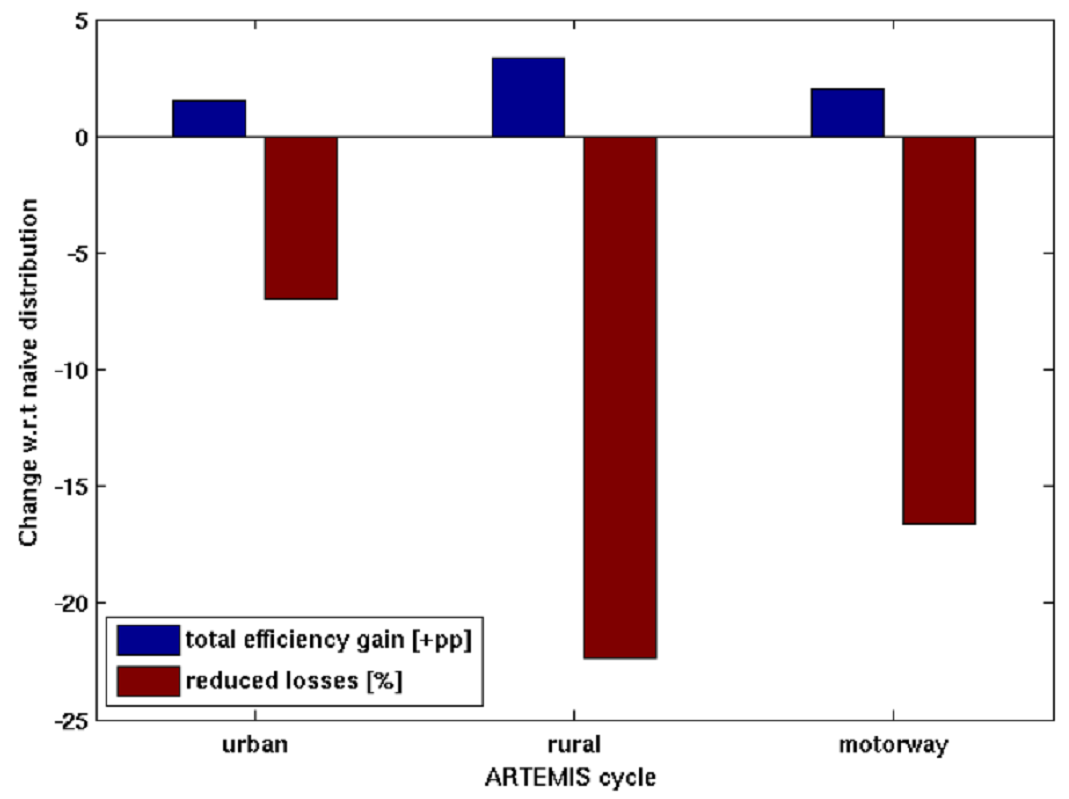 In analogy to the energy optimal torque distribution in case of acceleration, using one electric motor per axle also allows to shift generator brake torque between front and rear axle. The target here mainly is to guarantee vehicle stability, but also to hold energy recovery active as long as possible and thereby to increase energy efficiency. Normally vehicle stability can be guaranteed when following the installed brake force distribution, which in OpEneR is about 70:30 with respect to front and rear axle. Fig. 8 shows the shares of recuperation and friction braking in different vehicle deceleration levels. 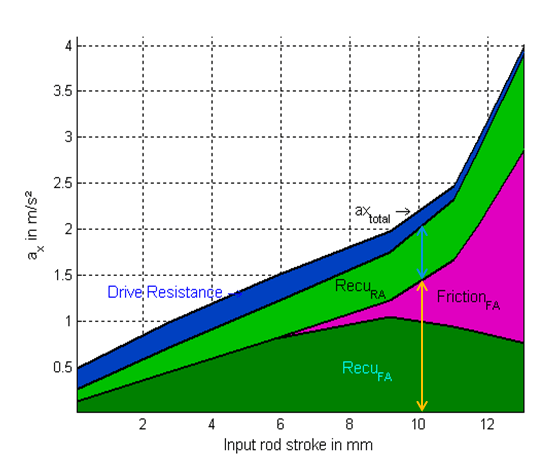 Fig. 8 Shares of recuperation and friction braking in the vehicle deceleration.

Fig. 9 depicts the specific braking system and powertrain configuration that is used within the OpEneR prototypes. Vacuum free brake force amplification is realised by the electro mechanical brake booster called iBooster. Energy recuperation by the electric motors is supported by the regenerative braking system ESP®hev II that communicates generator brake torque requests to the electric motors via the vehicle control unit (VCU). 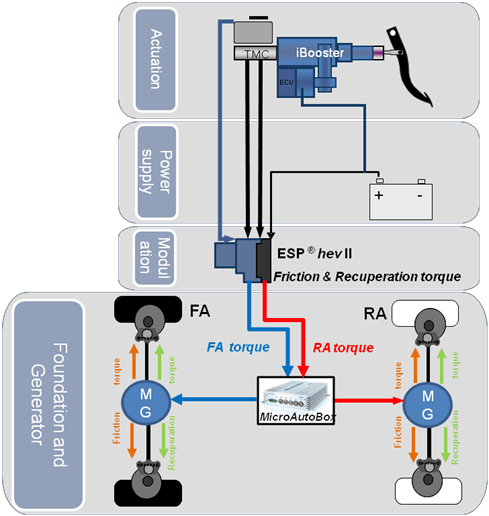 An additional increase of energy efficiency can be achieved by taking extensive information sources into account. Advanced environmental perception via video and radar, map data and communication with infrastructure and nearby vehicles (C2X) allows planning of energy efficient-optimized trajectories. A coasting assistant was developed and integrated into the vehicles guiding the driver to approach speed limits or traffic lights in an efficient way by utilizing most of the excess kinetic energy.

When the driver accepts the coasting assistant’s hints, all the kinetic excess energy is used to travel by coasting down with declutched machines. However, if the driver decides that he doesn’t want to coast for a long distance, he can still keep the throttle and release the accelerator pedal in a later phase of the approach. In such a case the coasting assistant will combine coasting with a recuperation phase which is optimized in terms of energy-efficiency.

Fig. 10 shows the results of a driver study comparing the energy consumption of the same drivers with and without Coasting Assistant for two typical roads. It can be seen that, depending on the route, an average range increase of up to 21 % is possible while increasing the travel time by merely 4 %. 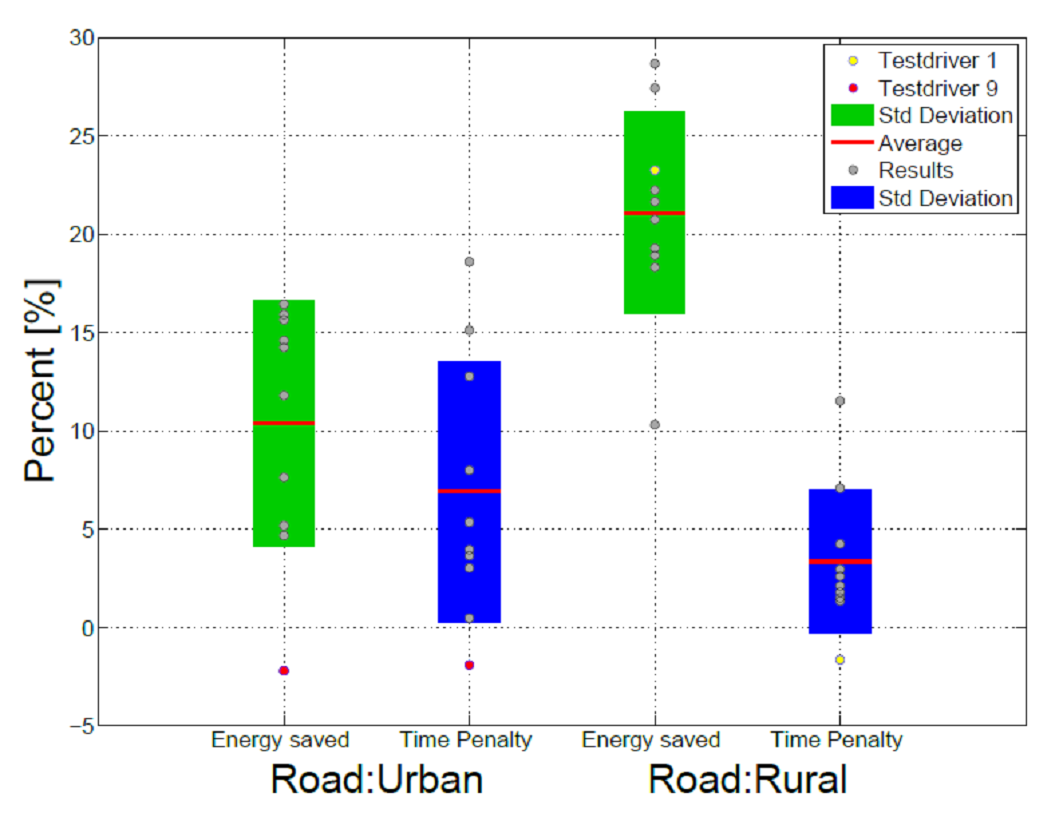 State-of-the-art Adaptive Cruise Control (ACC) cannot be directly copied to hybrid or electric vehicles. In general energy recuperation capabilities of the vehicles need to be considered in the most benefiting way. In OpEneR investigations were run to define the deceleration of the ego vehicle when approaching a slower vehicle in front. Thereby the target is to define a strategy that consumes the least amount of energy. Concerning energy need, the best strategy is to decelerate first by means of the electric motors and to further approach the other vehicle in a coasting mode using no energy at all. Optimal deceleration strategies were calculated by means of Dynamic Programming according to Bellmann. Deceleration can by energy optimal or time
optimal or any combination. Fig. 11 shows the Pareto front defined by different strategies of approaching a slower vehicle in front. 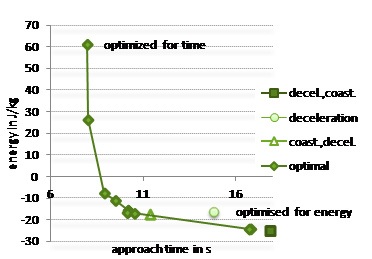 Fig. 12 shows the results for energy consumptions simulated with series ACC in comparison to different deceleration strategies. The energy savings potential is 5 % up to 25 % depending on the use case, e.g. defined by the range of foresight. 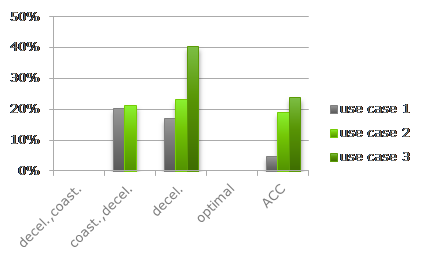 As motivated for the coasting assistant, the driver’s behavior significantly influences the energy consumption during vehicle operation. An active accelerating pedal is integrated in the OpEneR vehicles in order to give feedback regarding the current driving style. The active acceleration pedal can provide a counterforce controlled by the energy manager’s acceleration assistant. The considered aspects for the Acceleration Assistant are depicted in Fig. 13. When a high torque is requested, the energy losses in the inverter increase and hence the efficiency of the operated powertrain is reduced. The employed counterforce enables the driver to sense when further acceleration significantly reduces energy efficiency of the powertrain operation. An increase of the electric machine’s efficiency of up to 5 percentage points is possible for typical acceleration phases if the driver follows the given advice. 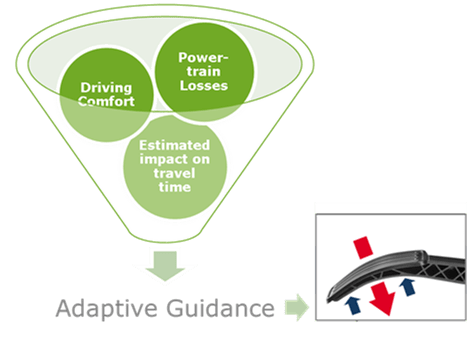 Fig. 13 Concept of the Acceleration Assistant.

Examination of the power consumption of auxiliaries shows that thermal conditioning of the passenger cabin can decrease the range of an electric vehicle by up to 50 % in central-European climate conditions. An adaptive control of the ventilation and heating elements would be able to significantly reduce this impact. Within the scope of the OpEneR project, an appropriate modelling of auxiliary energy consumption modelling was researched in order to allow optimal control of the system’s components, leading to reduced energy consumption without compromising comfort significantly.  Aspects to be considered for the modelling of the Heating, Ventilation and Air Conditioning (HVAC) system’s energy consumption are exemplarily given in Fig. 14.

Various diverse OpEneR vehicle subsystems need to be considered in new algorithms for energy saving driving strategies, and this leads to a complex energy management system. The stepwise approach via OpEneR Technology Levels and the modularity of the whole system helps to control this, and also to define the gain from the different systems and information added to the energy manager. One important way to deal with system complexity during the development of new control functions or algorithms, while guaranteeing vehicle safety, is through the use of advanced model based simulation techniques. However, their successful application requires the development of an accurate simulation platform, consisting of realistic vehicle and powertrain models, 3D driving routes and sensors, controllers, actuators and driver models. In the OpEneR project co-simulation techniques are deployed to combine the following simulation tools (see Fig. 15)

A seamless simulation toolchain enables fast migration of developed control strategies to the use in testbed and test track. It  supports the  reuse of  office simulation  models  and provides fast  test case  migration  throughout  the development process from Office PC  to HiL on 4WD powertrain testbed (see Fig. 16) and road tests. In this subsequent steps, software functions can be calibrated and further validated using SiL and or HiL approaches that are closely integrated with the same co-simulation tools. Finally the technology can be integrated into prototype vehicles, which are reproducibly evaluated powertrain or vehicle testbeds, driven with essentially similar simulation models that allow back-to-back testing of alternative predictive functions, something barely possible in the real world where the traffic conditions vary in every test.

Assistant functions supporting the driver in running a vehicle in an energy efficient way demand for a suitable Human Machine Interface (HMI). This HMI was defined taking into account OpEneR systems requirements, including software and hardware implementation (see Fig. 17). 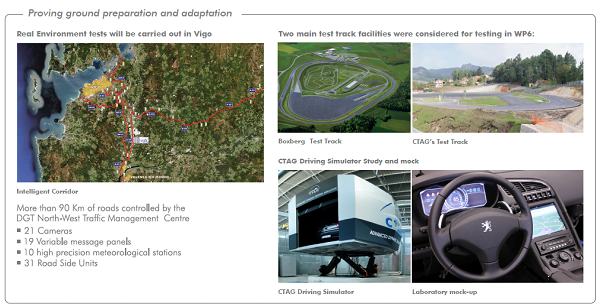 After the methodology and test plan definition, the required tests will be conducted to validate OpEneR system in order to elaborate a final test study with end users. This study aims on achieving insights into issues like understandability, controllability, and safety of the driver-vehicle interaction to naïve users as well as end users’ acceptance (see Fig. 19).

Gathered data will be analysed and evaluated, compared to simulated results, providing valuable results on technical, user related and impact assessment (final results at the end of the project in July 2014).

OpEneR project is co-funded by the 7th Framework Programme of the EC.