In the framework of the European project FREVUE (FReight Electric Vehicles in Urban Europe), urban logistics operators tested fully electric vehicles for their daily delivery operations in eight of Europe’s largest cities. Results of the project show that the benefits could be great for the society both in environmental and economic terms.

In 2013, when the FREVUE project started, the objectives of the partners engaged in the demonstrations were to prove that the huge potential of freight electric vehicles to reduce local air and noise pollution perceived at this time was real and also to show that the technology was mature, reliable and suitable enough for daily logistics operations in real urban conditions. After more than four years of demonstrations, FREVUE partners are on the right way to win their bet.

Some months after the beginning of the project, with the support of various partners and the relevant local authorities, ten logistics operators started their operations with electric trucks and vans in eight of Europe’s largest cities: Amsterdam and Rotterdam (the Netherlands), Lisbon (Portugal), London (United-Kingdom), Madrid (Spain), Milan (Italy), Oslo (Norway) and Stockholm (Sweden).

The variety of cities operators involved in the project allowed the partners to test the in a variety of climates, policy environments and city typologies. Due to the activities of the private logistics operators, and the different types of goods they deliver, several types of vehicles have been used, from small vans for postal service, to refrigerated vehicles for fresh food or pharmaceutical products deliveries, to medium-size and large trucks for furniture or beverage deliveries. In total, FREVUE partners tested over 80 vehicles, co-funded by the European Union. The research partners of the project collected the data from these fully electric vehicles (as well as from serveral other fully electric vehicles not co-funded by the European Union) in order to assess their potential and suitability for urban logistics operations. 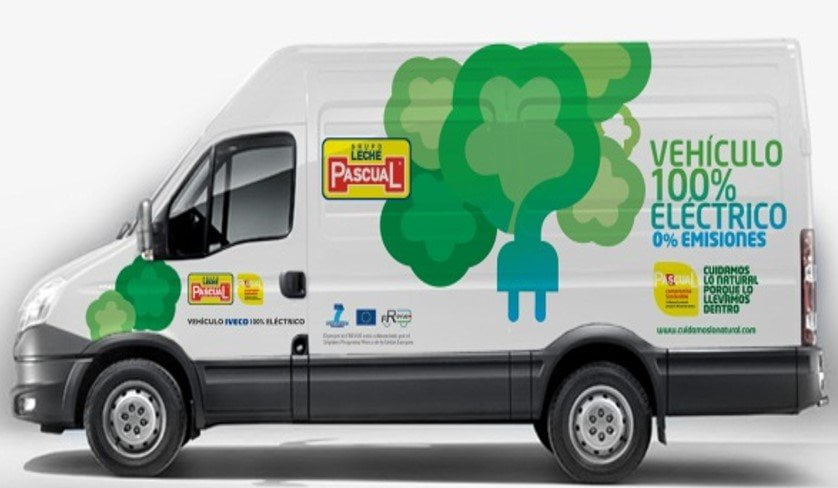 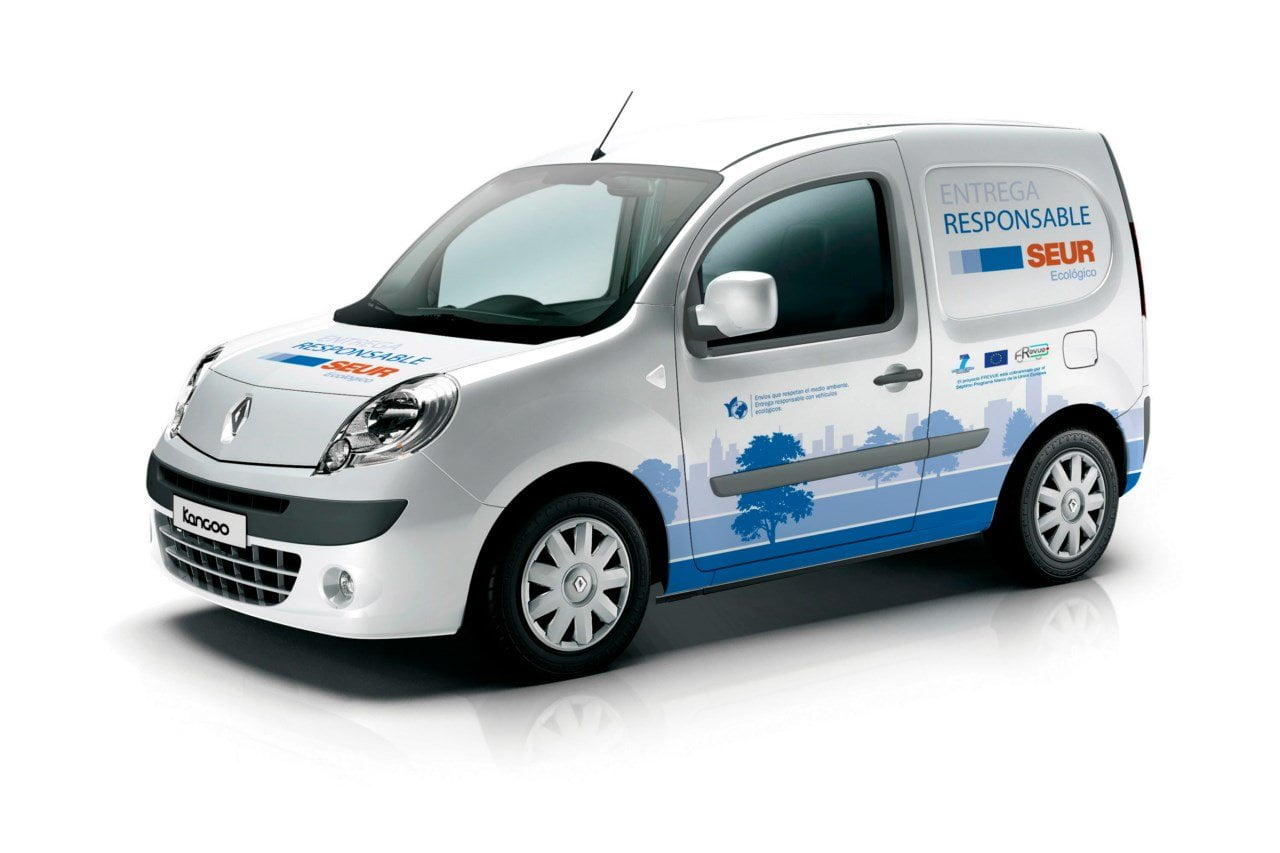 The first conclusion of the project is that freight electric vehicles’ performances are good enough for daily use in urban environments. The technology proved to be mature and robust enough to allow the inclusion of electric vans and trucks in commercial vehicles fleets. Altogether, the 83 vehicles of the project covered a total distance of 757,000 km, the equivalent distance of 19 times around the Earth at the equator.

A more detailed analysis of the data shows a particular suitability of these vehicles for urban logistics activities. The electric small vans (the most numerous) attain a peak of energy efficiency when they drive at a speed range of 30 to 35 km/h, a typical speed range in urban traffic. On average, vans can drive a distance of 6.8 kilometers per kWh at this speed while the figure drops to 5.8 kilometers per kWh when the speed range rises above 60 km/h. The impact of the speed range on the energy efficiency of larger vans and trucks seems to be marginal.

The analysis of data also confirms the better adaptability of electric vans (12t) – tends to increase their energy efficiency when the temperature rises.

Additionally to the technical suitability, freight electric vehicles have enormous environmental advantages, compared to similar diesel vehicles. The studies carried out within FREVUE show that freight electric vehicles can reduce significantly the overall emissions of NOx, PM and CO2 of the urban logistics sector. By way of example, when compared to activities with Euro 3/III vehicles, it is estimated that the FREVUE activities only have allowed to decrease the emissions of NOx by 2.1t and the emissions of PM by 72kg: the total emissions related to traffic in the City of London for respectively 3 days and 2 days. The reduction of greenhouse gas emissions is estimated at approximately 180 tones, with a well-to-wheel calculation: it is one day of CO2 emission by the road traffic in the City of London. Of course, the reduction of emissions of CO2 depends a lot on the electricity production modes as electric vehicles are tailpipe emission-free.

The research partners of FREVUE also calculated the impacts of a wider deployment of freight electric vehicles in the agglomeration of London. Even a low penetration rate of 10% by 2021 could have substantial impacts, compared to the current estimations in which a major deployment of freight vans and trucks is not considered. NOx emissions could be decreased by 402,000 tones, the PM emissions by 3.8 tones and the local CO2 emissions by 284,000 tones. In monetary terms, and only for the agglomeration of London, the savings due to the NOx emissions reduction would be of €1 billion per year and the savings due to the CO2 emission reductions would be of €16 million per year.

For the cities’ inhabitants, the emissions reduction would have an excellent impact on their health. In addition, the use of electric delivery vehicles would also make the urban environment much quieter primarily for the drivers but also for the residents, the shop owners and their consumers. 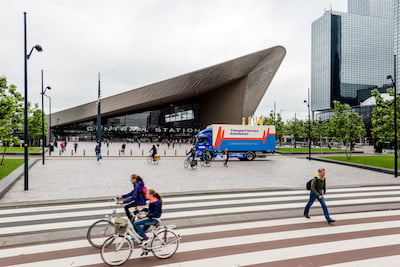 The economic challenge: the last barrier before mass deployment

Despite its environmental benefits and its technical suitability, electric vans and trucks remain more expensive than their diesel counterparts. The FREVUE research shows that financial and fiscal incentives are necessary for the development of the market nowadays. With this economic support, a positive business case is achievable for small and medium electric freight vehicles. However, the price difference between large electric trucks and large conventional trucks is so large that the business case remains very difficult to make.

The high prices of big electric trucks – and of small and medium vehicles to a lesser extent – are partly due to the low production which is influenced by the low (perceived) demand for this type of vehicles. In order to solve this issue, the FREVUE project has launched a joint Declaration of Intent on freight electric vehicles. The FREVUE cities and partners invite urban logistics operators and all fleet operators to sign this declaration to show to the industry that there is an existing demand and that a market is at hand (more information at www.frevue.eu/declaration-of-intent). It is expected that the initiative will trigger the production and consecutively make the prices decrease.

A bright future for electric vans and trucks?

The results described above and new recent developments make the FREVUE partners optimistic regarding the deployment of freight electric vehicles in Europe in the coming years. Indeed, several logistics operators involved in FREVUE have recently decided to expand their electric freight fleets, without the support of the European Union. This confirms the operational suitability and robustness of the technology as well as the possibility to make a positive business case. In addition, the observed acceptance from both the drivers and the public is largely positive. For drivers, the decrease in noise and vibrations is appreciated. For the public, living, working and shopping in less noisy and polluted streets is much valued. And finally, shop owners see their commercial image improved due to their cooperation with electric logistics operators and are ready to pay a fair price for the service. 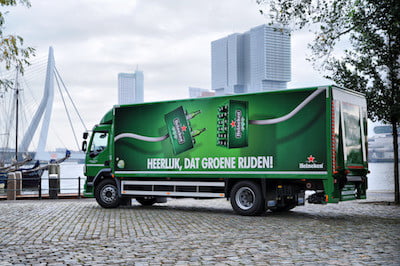 Together, local authorities, logistics operators, manufacturers and all stakeholders of the logistics chain have the opportunity to make electric urban freight in European cities a reality!