P-MOB and his brother Wide-Mob have addressed the development of EVs that can both meet the regulations of the classical M1 category of vehicles and the new regulations of Micro EVs vehicles (weighting less than 600kg before the installation of the battery pack and that can have a speed higher than 100km/h). This novel concept enables new business approaches. The design has aimed for the highest safety requirements, a low footprint and extremely low energy consumption making the vehicle ideal for most people’s needs in cities as well as on suburban roads.

All technologies have been developed during the project by the partners. The MOB vehicle has been the first to be proposed with a two motor powertrain with one motor per axle. The control of the two motor powertrain with the possibility to vary torque distribution between the axles in relation to the condition of driving is core for high vehicle stability and high energy recovery. Similarly important is the concept of smart photovoltaics where smart diodes and self-adapting electronics minimise the impact of shadows and rupture or malfunctioning of one cell on the full panel. We demonstrated an average daily autonomy of up to 20km over the year in the Torino area with solar radiation only.

The vehicle is specifically designed to allow an easy reconfiguration of the architecture. The safety cell is based on an asymmetrical design assuring high safety against both frontal and lateral impacts. There are only on one side two doors, allowing for high ergonomics and reduced complexity.  The aerodrag is 30% lower than that of vehicles of the same dimensions. The vehicle has been tested on the official FIAT proving ground. The performance fit the expectations of the design (very high stability on small radius curves and an average energy consumption of the order of 80Wh/km).

All the concepts developed and implemented within the project have been patented in EU, US and China. 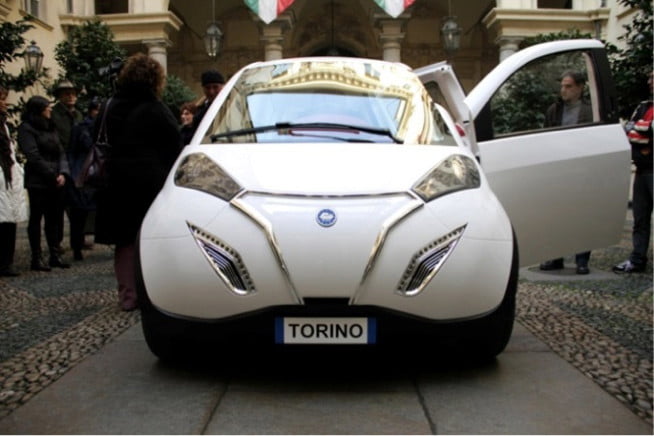 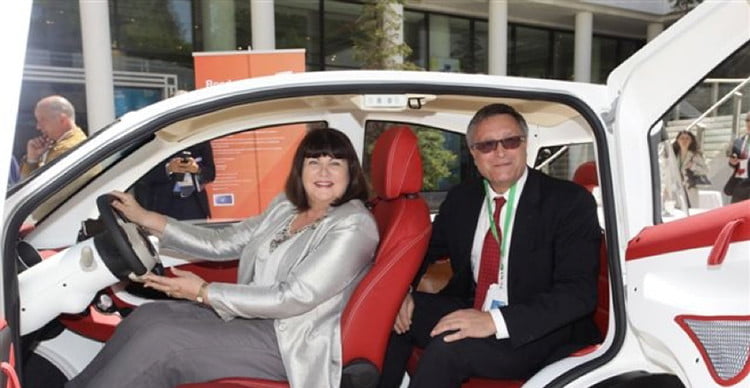 The public presentations made in Torino, Athens and Brussels have received very positive feedbacks from young, old, women and men. Indeed they all like the vehicle. The MOB vehicle has been conceived  in order to satisfy a rational demand for mobility: clean, safe and low energy consumption vehicles, requiring less energy in their production and built from recyclable materials-systems.

In Japan these so-called classical KEI cars already represent 40% of the market. Their evolution towards becoming electric is an obvious consequence. The European automotive industry will be very soon faced with that new competition.  P-MOB and WIDE-MOB are showing Europe is ready to compete.

Partners of the project are Centro Ricerche Fiat (coordination), IFEVS (IT), Polimodel (IT), Siemens(DE), The University of Sheffield (UK), Magnomatics (UK), Mazel (SP).

The work reported is part of the European project P-MOB which has been fruit of brokering inside the EPoSS community and funded through the Greencar initiative in the FP7 framework Grant Agreement no. 260087. It shall continue with the EU-MOBY variable design platform (2013-2016) that through a coordinated action of DG-CONNECT and DG-RTD is addressing the development of safe and efficient Micro EVs.