Official launch of the EGVI PPP on 17 December 2013

The European Green Vehicles Initiative contractual public private partnership was launched on Tuesday 17 December, with the signature of a Memorandum of Understanding between Mr. Wolfgang Steiger, representing EGVIA, and Mrs. Maire Geoghegan-Quinn, EU Commissioner for Research, Innovation and Science. 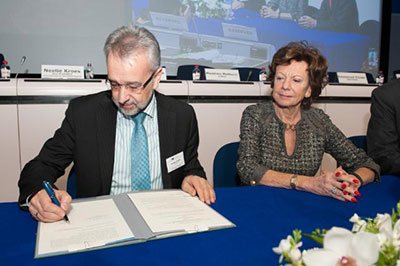 The official ceremony was organised as part of the Information Days on the Research cPPPs. The Multiannual Roadmap for the European Green Vehicles Initiative PPP was distributed to the participants on this occasion. It is also available for download on this website.

This document constitutes the text of reference for the implementation of the EGVI PPP. It is based on the relevant research and innovation roadmaps and strategic agendas developed by the European Technology Platforms – ERTRAC, EPoSS and SmartGrids.

These publications are all available for consultation:

The Horizon Europe provisional Work Programme of Cluster 5 (climate, energy and mobility) is now available. This draft is made available before the formal adoption of the Work Programme to provide...
Read more
News 25/11/2022

Last week was very busy for the 2Zero partnership with an active contribution to the Transport Research Arena conference in Lisbon from the 14th to the 16th of November. Either by being involved in se...
Read more
Back to list