Fuel economy is a key aspect to reduce operating costs and improve the efficiency of freight traffic, thus increasing truck competitiveness. Under the coordination of AVL, the main objective of the IMPERIUM project was to achieve fuel consumption reduction up to 20% (diesel and urea) compared to model – year 2014 vehicle whilst keeping the vehicle within the legal limits for pollutant emissions. The IMPERIUM consortium, regrouping major European actors, is responsible for 45% of the heavy-duty vehicles manufactured in the EU and can provide a 100% European value chain for the development of future powertrain control strategies for trucks.

Fuel consumption is highly dependent from the mission, from the traffic and from the environment. Therefore, a simulation-based validation strategy was developed to better take into account these different scenarios. Further, the aspect of “representable traffic conditions” has been by the analysis of European traffic routes and transfer of typical traffic scenarios on the VECTO CO2 Long-Haul cycle. The simulation platform enables interaction of the ego-vehicle with defined traffic scenarios for validation.

The newly developed components have been first validated on various platforms like HiL, engine testbed and demonstrator trucks and then further integrated into this environment for evaluation of their impact on the complete system. Thanks to this approach, many different technologies (and combination thereof) could be investigated, implemented and evaluated with respect to their contribution regarding fuel consumption improvement.

IMPERIUM has been successful in the demonstration of technical possibility on significant fuel consumption reduction whilst keeping the vehicle within the legal limits for pollutant emissions.

In the transport sector, the reduction of real driving emissions and fuel consumption in long haul traffic is one of the main societal challenges. Regulations e.g. Euro VI are a baseline with respect to targets in defined test environment conditions, while a clear need exists to have real driving efficiency measurements to promote the introduction of innovative solutions for fuel consumption and emission reductions.

Fuel efficiency and emissions reduction interact with each other and vary with the specific vehicle application, operating conditions and mission. The overall objective is the development of new means of predictive and comprehensive powertrain control in an optimal way, exploiting to the full potential of the individual systems for each vehicle application and mission.

The pre-condition for predictive vehicle control is the knowledge on future velocity profile. Within the IMPERIUM project a dynamic eHorizon system is developed and applied in 3 different trucks with a “look ahead” capability of delivering static (topology, speed limits, curve radii …), learned (truck behavior) and dynamic data (speed limit changes, traffic flow, construction sites, incidents, local weather…) with respect to the road ahead.

The measures for fuel consumption reduction are grouped into 4 clusters with each combining conventional, rule-based and/or predictive implementations (1) Engine and EAS control, (2) Hybridization, (3) Thermal management and (4) Global powertrain and vehicle supervisor. 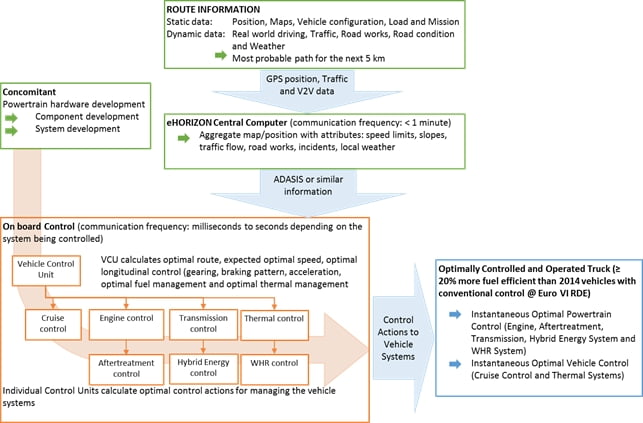 Figure 2: Overall concept of the project, the major elements and targeted outcome

The VECTO CO2 Long-Haul cycle definition is used as a reference cycle. The Long-Haul cycle is further enriched by simulated traffic interacting with the driving truck as the IMPERIUM technologies are influenced by the traffic situation. By combining the simulation environment with a new meta-model-based evaluation methodology developed in the IMPERIUM project, the benefit of these technologies is evaluated under traffic conditions on the ‘IMPERIUM Long-Haul’ cycle.

The IMPERIUM project developed and demonstrated optimal powertrain control and advanced powertrain concepts for heavy-duty vehicles, integration thereof into test beds and demonstration vehicles and proof compliance with fuel economy targets (≥ 20% improvement compared to the same vehicle with conventional control) and Euro VI standards under real driving conditions. IMPERIUM also developed a methodology to determine the fuel efficiency of heavy-duty vehicles and the compliance with Euro VI under real driving conditions based on a smart combination of simulations, measurements and tests. The methodology was used to determine the fuel economy, UREA consumption and emissions of the 2014 Reference Vehicles of the OEMs (the Baseline) and the IMPERIUM demonstrator vehicles. 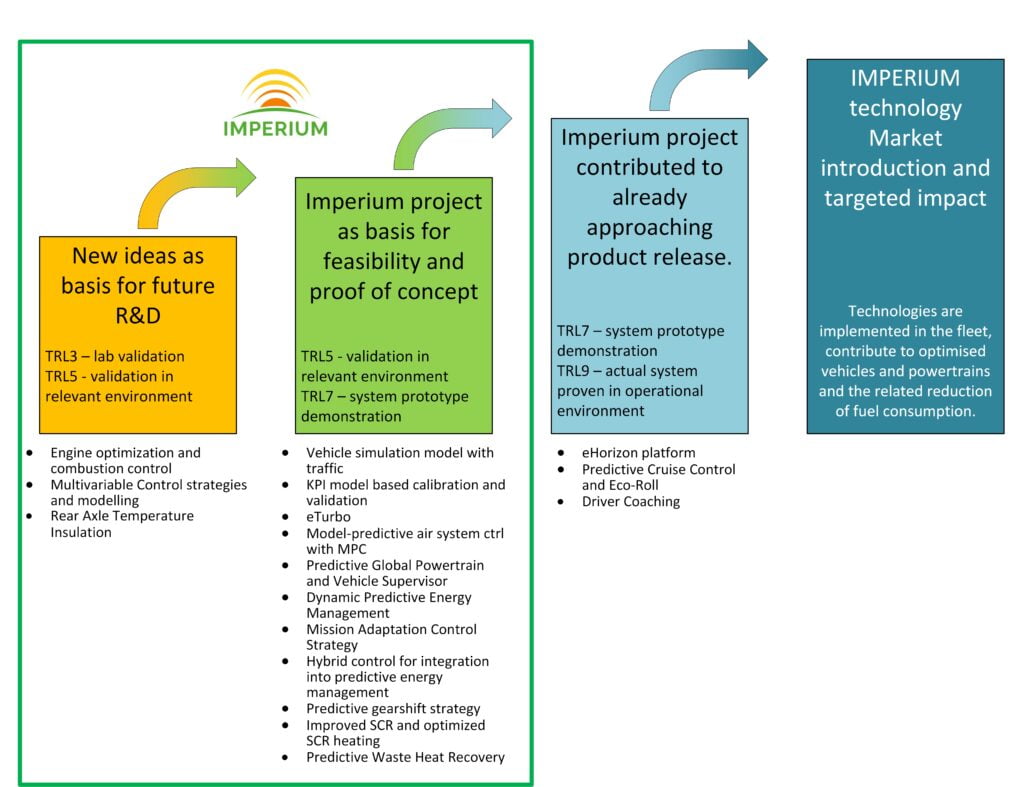 As simulated traffic is included, interactions between the vehicle under test and the traffic will influence the fuel consumption result. Therefore, the statistical nature of the results must be considered. The demonstrator trucks developed during the IMPERIUM project show the benefits range from 5.75% to 11%. When considering the findings, a 95% confidence interval of 0.8 % (+/- 0.3%) should be applied.

Due to different maturity levels, not all technologies developed on the IMPERIUM project were planned to be integrated onto the demonstrator trucks. Therefore a ‘virtual combination’ vehicle was simulated for each truck. The benefit of these combined vehicles on the ‘IMPERIUM Long-Haul’ cycle ranges from 13.6% to 16%.

This simulation assessment is limited to one vehicle per work package. Of the above vehicles, Truck 2 is the closest to an overall ‘combined vehicle’, however, the model does not include several technologies, developed in other work packages. These technologies combined provide a cumulative benefit of 6.6%. When all technologies are considered together using a mixed simulation approach, the total benefit of the IMPERIUM technologies amounts to a reduction in fuel consumption of 20.3±2.1 %, relative to the MY2014 state of the art baseline. 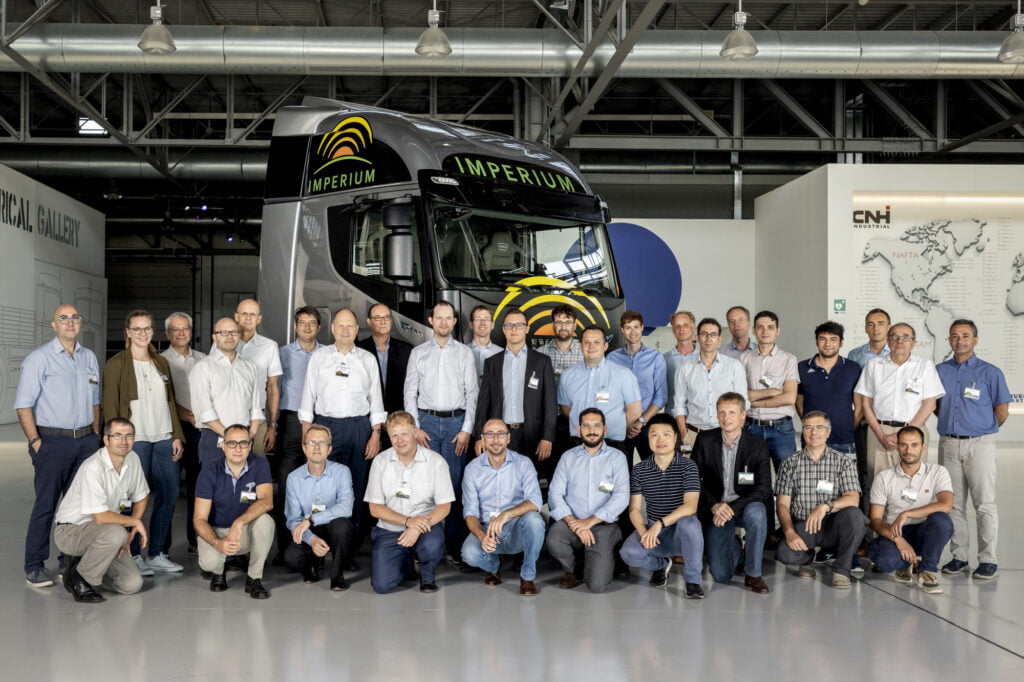 Figure 5: Members of the IMPERIUM consortium at the final project event

The research leading to these results has received funding from the European Union’s Horizon 2020 research and innovation programme under grant agreement n° 713783 (IMPERIUM) and from the Swiss State Secretariat for Education, Research and Innovation (SERI) under contract n°16.0063 for the Swiss consortium members.

The project was a cooperation of the consortium consisting of the following partners under the lead of AVL.

Affordable Multi-Material Lightweight Design   Overview of the final results of the H2020 project ALLIANCE In the last years, the research activities in the field of lightweighting have be...

You can change these settings at any time. However, this can result in some functions no longer being available. For information on deleting the cookies, please consult your browser’s help function.

With the slider, you can enable or disable different types of cookies: