The electric powertrain HEalth Monitoring for Increased Safety of FEVs (HEMIS) is a European project under the 7th Framework Program of the European Commission. The project started in June 2012 and aims at enhancing the safety and maintainability of fully electric vehicles. It has a total budget close to €3 million and involves a consortium of 7 partners from 4 European countries: CEIT-Ik4 (coordinator), Jema and Idiada from Spain, MIRA Ltd. and York EMC Services from the UK, Politecnico di Milano from Italy and VTT from Finland.

In order to achieve the 2020 target of reducing energy consumption and CO2 emissions, electric vehicles need to reach a significant market share. However, this objective presents manufacturers with new challenges due to the scarcity of reliability data for the new technologies involved; the most notable of these being the electric powertrain. This means, for example, that the lifespan and potential failure mechanisms for the components are not yet fully understood. Besides, the electric powertrain components are also additional sources of electromagnetic fields, which need to be taken into account.

The main objectives of the HEMIS project (see Figure 1) are: 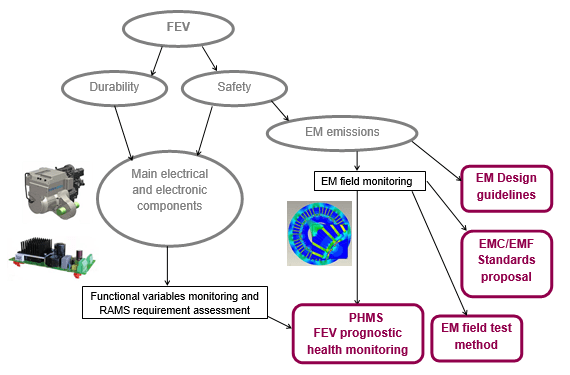 The HEMIS PHMS concept is outlined in Figure 2 below. On-line assessment of the powertrain condition is based on in-vehicle sensing of suitable physical parameters, such as voltages, currents, temperatures or vibration (see Figure 1) and other relevant variables available from the vehicle communications networks, like vehicle speed. Diagnostic and prognostic algorithms developed within the project will then use the values of these physical parameters to assess the powertrain’s condition and failsafe state, and estimate the RUL of its critical components. Valuable powertrain condition information will also be provided to the maintenance service. 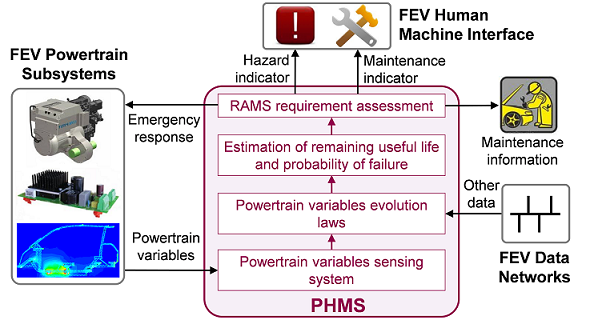 In order to identify the most critical failure modes, the architecture of a generic electric vehicle was defined and a RAMS (reliability, availability, maintainability and safety) analysis was undertaken. The failure modes and components identified as most critical were: loss of magnetic field, bearing degradation, and stator winding degradation for the motor; and capacitor and IGBT degradation for the control. Once the most critical failure modes of the powertrain components were identified the candidate physical parameters available for monitoring were assessed considering a range of different factors. These included the accuracy and reliability of their measurement, the cost of the sensors, the feasibility of their integration into a commercial powertrain, and the potential to detect, diagnose and predict component failure using these physical parameters. For the latter, literature analyses, simulations and laboratory tests (e.g. Figure 3) were performed in order to collect datasets related to the evolution of these variables during the degradation processes. Suggestions from the project’s Industrial Advisory Panel were also taken into account.

Afterwards, monitoring algorithms have been developed for the selected failure modes. Depending on the degradation and information characteristics, different approaches have been applied to build up the degradation model. For example, the algorithm proposed for the prediction of the capacitor RUL is based on particle filtering approach. Notice that its application to a different capacitor type only requires the tuning of the algorithm parameters in order to reduce the estimation uncertainty. Another example is the algorithm proposed for bearing monitoring which is based on a hierarchical architecture of K-Nearest Neighbour classifiers. Different features extracted from acceleration signals in the time and frequency domains have been considered, and an optimal feature set has been identified with the aim of maximizing the diagnostic system performance and minimizing the associated cost. Since the external conditions experienced by automotive bearings remarkably influence the acceleration signal data and, thus, may cause unsatisfactory performance in practical applications, a further requirement is the independence of the extracted features from the external conditions.

The accuracy of the developed method has been successfully verified with respect to the Western Reserve Case University Bearing Dataset, which contains real vibration data collected in experimental tests performed on degraded bearings. The results obtained showed that the different degradation modes are clearly separated (see Figure 4): the percentage of patterns for which the classification is correct is 79.78% in the case in which the training set is forced to contain only patterns collected from an operational condition (load) different from that of the test patterns and 97.61% in the case in which the training set contains patterns collected at any load. 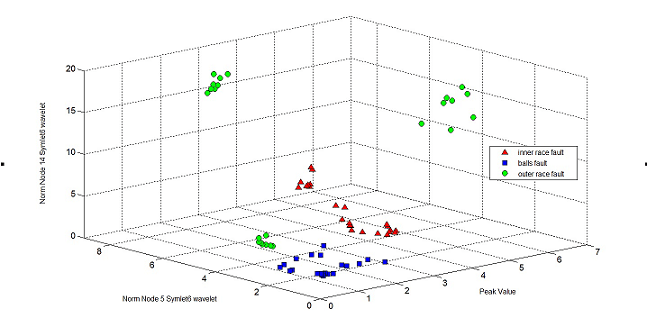 Currently, sensors have been defined and the PHMS is being built and programmed. The PHMS will be validated in the subsequent months.

Assessment of EMC and EMF issues

A detailed review of existing and planned automotive EMC standards has been carried out and documented. It was concluded that further development of standards is required in order to fully reflect the features of electric powertrains. Hence, testing procedures and suitable test equipment for filling the gaps detected during the first period have been proposed and are available on the project’s website.

Moreover, an approach for modeling the impact of low frequency magnetic field (due to traction currents, for example) on the human body has been proposed. These emissions may cause electro-stimulation of tissues such as muscles and nerves and should therefore comply with recommended exposure limits. Exposure risks are assessed by comparing the electromagnetic environment with field reference levels, which should ensure compliance with restrictions on in-body quantities such as induced current density and electric field in human tissues. However, the existing field reference levels have been developed for standing human under uniform field exposure, whereas for the in-vehicle environment the occupants are seated and exposed to non-uniform field distributions. Consequently, numerical simulations based on a seated human model under magnetic field exposures that are representative of electrical powertrain traction currents (see Figure 5) have been carried out to assess the validity of the field reference levels.

The conclusion of the research undertaken in the HEMIS project is that the magnetic flux density reference levels defined in the ICNIRP 1998 exposure guidelines (which are reflected in the EU recommendation 1999/519/EC for general public exposure) provide a more reliable safety margin (see Figure 6) in terms of the exposure limits of both ICNIRP 1998 and the more recent ICNIRP 2010 guidelines (for low frequency effects). However, the magnetic flux density reference levels specified in ICNIRP 2010 and the EU occupational exposure directive 2013/35/EU may not provide adequate protection with respect to the exposure limits. 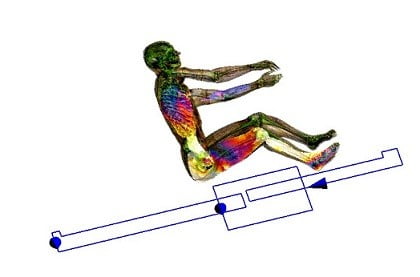 Given the size and space constrains of road vehicles, the electric powertrain components are likely to be in relative close proximity to passenger compartment. Exposure measurements carried out on a 70 kW automotive electric powertrain under steady-state conditions for a range of speed and load combinations indicated exposures of the order of 150 times the magnetic field reference levels adjacent to the motor power cable entries (see Figure 7), falling to 100% of the reference level at distances of 20 cm (see Figure 8). Taking into account the results obtained in the HEMIS project, a number of possible mitigation techniques have been proposed.