Sustainability is a truly global trend leading carmakers in the US, Japan, Europe and China to propel electrified mobility into the mass market. This stipulates fundamental efforts in the European automotive and semiconductor industry to improve efficiency and reduce weight, size and costs to stay competitive. The FP7 project Castor – conceived in 2010 – facilitates radical automotive innovation enabled by semiconductors. Castor will not only improve the semiconductor growth rate which is usually correlated with the product growth itself but will address accelerated growth expectations coming from radical innovations.

The project is driven by 7 partners among 3 value chains with the contribution of two major OEMs, one Tier1-Supplier, one of the major European semiconductor suppliers Infineon including one SME together with two academic partners. The consortium provides sustainable drive train technologies, control techniques and platforms for inherently failsafe and highly efficient Electric-Vehicle (EV) powertrains including control and more efficient and less complex battery solutions for the 3rd generation of EVs.

The Castor partners have fundamentally redesigned the interface architecture between motor, inverter and controller (demonstrated for 60 KW 6-phase motor power class and 15KW motor power class). In the 120 year history of powertrain development, this represents a quantum jump which was enabled by introducing novel Nano-electronics controlling the multiphase motor architecture. Multiphase motor drives possess several advantages over conventional three-phase drives, such as lower torque pulsation, higher torque density, fault tolerance, stability, high efficiency and lower current ripple. When the number of phases increases, it is also possible to increase the power / torque per RMS ampere for the same volume machine. This not only leads to a significant improvement of functionality of the powertrain but also to a reduction of weight and cost, making the system including the battery much more efficient.

The system costs will be reduced through the multiphase design that leads to lower phase currents providing better power density with less passive components. The cost saving potential for the powertrain and the battery compared with the market price of a typical new compact class EV is about 7 % or 4-5 % for HEV.

The CASTOR project had been started in between a row of subsequent collaboration projects (BATMAN, E3CAR) in order to push the technical improvement and in consequence boost the market acceptance of Fully Electric Vehicles. Advancements in efficiency and safety by implementing a multi propulsion power train enabling novel driving functionalities based on the holistic understanding of propulsion and related energy conversion needs were ambitious goals addressed in this project.

Two main domains have been targeted in CASTOR: The Power Train and the Energy Storage System. During the execution of the project, encouraging results have been achieved regarding both domains:

Solutions of high interest have surely been the e-motor/inverter integration to move the e-drive/transmission integrated topologies. A complete new approach to Engine architecture and specifications for subsystems as Modules or Chips has been fulfilled. For two different power trains electronic modules including architectures and design integrated in the subsystems have been developed.

The design, manufacturing and development of a 6-phase-high power motor adjusted to the requirements needed to drive an EV-car class A has been performed. There have been significant advancements on circuit and module design also for the low power train. The PDD-3-phase-motor and integrated inverter and also the Battery module are resulting from great efforts in this project domain. Low power motors have been designed fitting for EV-car class B requirements.

Integrated Battery Packs and super caps as well as the combined use of both have been realized. The benefits of the combined cells have been assessed in terms of efficiency, thermal properties (especially at low temperatures) and cost.

The modeling for the integration of the two powertrains is in progress right now; novel power electronic converter and storage system architectures interfacing batteries and super caps have been evaluated. The „Energy storage‟ domain with the areas “module based integration” and “cell based integration” could not only make progress in the hardware but also initiate a harmonisation among different European research projects regarding the meaning of super caps in EV‟s.

Bringing up a smart electric system in order to improve propulsion and energy management and create an intelligent network on-board vehicle will further drive forward the development for future solutions. This will open up the chance to the European Car Industry to enhance its competence and to participate in opportunities opened up by this future technology on a large scale. 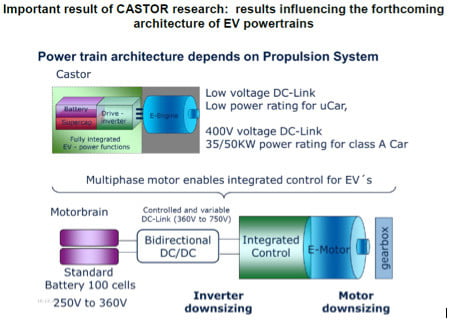